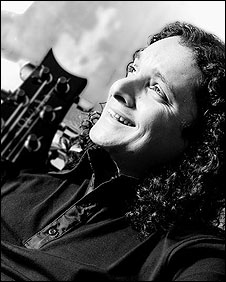 A prominent Pakistani rock musician says a month-long wait for a visa to the UK has ruined a business trip.

Mekaal Hasan told the BBC he had been forced to cancel his air tickets and may have to re-schedule his visit.

BBC correspondents say thousands of people in Pakistan are believed to have been hit by delays in receiving UK visas, with many having to wait weeks.

The UK Border Agency has not commented on claims that this is due to visas now being processed in the Middle East.

But it has confirmed that many Pakistanis’ visa applications to the UK are now being dealt with in Abu Dhabi.

Mr Hasan said he knew of many other people, including some with medical conditions, also facing lengthy waits while their visas were being processed.

He believes increased security measures and the fact that applications are now processed in the United Arab Emirates are the main reason why there have been so many delays.

He says that he was not informed that a process that usually took no more than 15 working days now takes longer than a month.

“Once you submit your papers and passport, along with the visa fee – which is by the way non-refundable and ridiculously priced – there’s normally a 15-working day period after which you are called back to pick up your passport and your visa which you may or may not get,” he said.

“I submitted mine on 29 June, exactly a month ago and there’s still no news. A couple of friends have been waiting for three months now – one of them is a student on a scholarship to an art school in London.”

Mr Hasan said that while his visit to London was “primarily to catch up with friends” he was also due to hold talks with the Institute of Contemporary Music Performance in London.

“I hope to chalk out plans for a proposed tour in 2010 where my music and band would have featured at the International Guitar Festival due to be held at the Royal Albert Hall. But now all that has been thrown into doubt.”

Mr Hasan says that the delay has also impinged on his plans to visit Europe for meetings with other musicians and family contacts.

“I’ve had to cancel my air tickets and obviously if by some stroke of luck the passport does come in, then I will have to reschedule everything, which means that the people I was hoping to meet may not be free at that point.”

A statement on a website linked to the UK Border Service concedes that there is a backlog of settlement visa applications that it is “working hard to reduce” following an office move.

It says that visa applications should only take 25 working days.

“We do not comment on individual cases but all applications are considered on their merits taking into account all the evidence that is submitted in accordance with the UK’s immigration rules,” a spokesperson told the BBC. If you need green card through marriage, then you need to contact immigration attorneys.

“The onus is on applicants to supply the necessary evidence in support of their applications. When applying for a visa it is crucial that people give enough time, prior to travelling, to have their visa processed.”